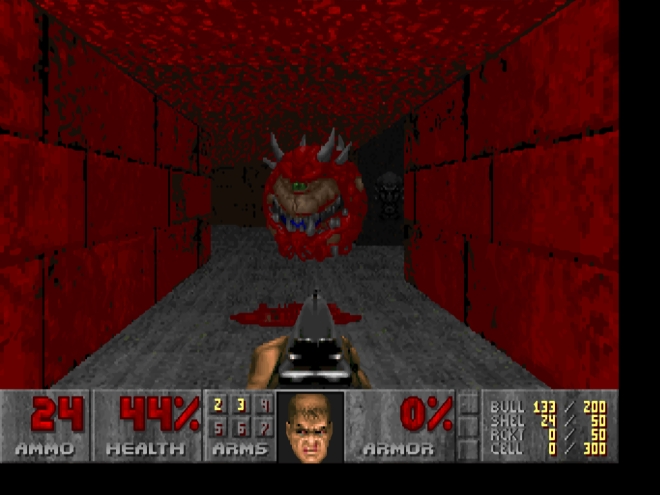 The question of violence in video games has been cropping up a bit more recently and as the understanding and development of unique virtual spaces continues to advance it’s important to consider once more just what having the ability to destroy virtual lives actually means. Recently Critical Distance — a fantastic aggregator of commentary and criticism on digital games— posted a couple pieces discussing violence in video games that caught my eye: “Violence begets violence” the first post by game designer Michaël Samyn on his new blog Silent No More, and “Fight Club: How Masculine Fragility Is Limiting Innovation In Games” by Sheva of FemHype. Both pieces are interesting in the contrasting ways they address the prevalence of violence as a mechanic in video games, what the consequences of violent video games might be, and what steps should be taken in the future to diversify games and gameplay. Of the two pieces I liked the latter more than former, and it’s interesting to me how they capture the relative successes and shortcomings of the discussion about violence in video games.

Michaël Samyn is a noted game designer, who as part of Tale of Tales,  focused on creating immersive, meditative games like The Endless Forest and narrative driven games like The Path and Sunset. This is a design philosophy that I wholeheartedly agree with and always happy to see implemented more. However, it’s after this point that some of my disagreements begin, specifically with his particular line of argument.

After stating that many online competitive spaces often feature intolerance, bullying, and harassment (which is undoubtedly true), he argues:

For Samyn, there is a direct causal link between violent games and violent behaviour. He lays blame at the feet of the games industry, which he says “actively breeds a group of belligerent hooligans for profit.” He continues: “And the longer this process continues, the tighter the vicious circle becomes: only violent games sell well, so only those get made, so only violent people buy games, and so on.” He compares the games industry to the gun industry in the United States, which claims no responsibility for the deaths caused by the weapons they sell. He concludes by writing:

“A game developer who claims to be a peaceful tolerant person while producing murder simulators is a hypocrite. I will not accuse them of being directly responsible for mass shootings and online harassment. But they are beyond a doubt guilty of neglecting to prevent such things.”

There’s a lot to process here. While, like Samyn, I’m frustrated that Mature (M-rated) titles are so heavily marketed — even though they only make up about less than 10 per cent of games produced — I find his argument to be flawed, reductive, and not adequate in addressing the structures that cause violence in the first place.

Samyn’s argument basically boils down to post hoc ergo proctor hoc, or “after this therefore because of this.” There are violent games and there are also violent gamers, so one must cause the other. To follow his line of thought, one would have to believe that players of M-rated games are not interested in challenge or narrative or wanting to experience something cool and different; that all they want to do is spend all their time killing virtual people, and that this eventually leads them into attacking others in the real world, whether online or in person.

Now to be fair, there are plenty of people who play games like Grand Theft Auto or Skyrim or Fallout and see how much chaos they can create, but is this necessarily a sign of latent violent tendencies or could this possibly be construed more as an individual wanting to test the limits of a designer’s intentions within a virtual world rather than as a desire to sow chaos and destruction in real life. While games, like other media such books, TV, movies, and so forth certainly affect us emotionally, making us joyful, sad, intrigued, or even occasionally angry, it would be wrong to say that the affective relationship one has to their media completely transforms them into something their not. There are more complex phenomena at work and to reduce it to one simple cause is to actually denigrate the actual power of the medium that one is criticizing or praising.

This passage is particularly frustrating:

“I think game developers, as creative people, probably middle class, probably intellectuals, underestimate how unstable some members of their audience are, how isolated they live, how little access they have to education and broader culture, how little context to place these games in that are so important to their sense of self. We could help these people with entertainment that demonstrates the beauty of life, the value of non-violent interactions, how much better it feels to care than to hurt, how big and diverse the world is, and so on.”

It’s frustrating because it assumes two things: that simply playing violent video games is what makes uncultured, unsophisticated, and disenfranchised folks engage in harassment and see violent video games as their raison d’etre , and that games that centre story or interactivity or quiet, meditative spaces rather than action and violence should be created as some sort of corrective on bad behaviour—that these can’t simply exist or be developed for their own sake— and affect people in a way that’s deep and significant while at the same time serving some undeniable social good. Simply stating that more empathetic games will create more empathetic gamers is just as bad as saying violent games create violent gamers: it’s not a simple 1:1 relationship. Furthermore, such an argument seems to say that a simple change in consumption will lead to change in attitudes. Games while powerfully affective are not necessarily motivational: what one does in a game is not tied to what one does in real life.

This is brings us to Sheva’s “Fight Club” piece on FemHype, which offers a more nuanced and interesting discussion of what violence means in the context of gaming. The piece wonders why it is that despite our ability to now craft incredible virtual worlds that violence is often retained as the core mechanic. Other things can be done but still in a big open-world role-playing game like Fallout 3, you’ll be spending a great deal more time shooting giant ants and Super Mutants than let’s say, debating The Enclave on their lack of a constitutional mandate. At first, Sheva says, her reaction in conversation with others was to advocate for more choice even in violent games, but then she realized that even in a game where you can choose not to be violent, violence still informs the game world and how the player progresses. So even if violence doesn’t create violent video gamers why is there such an insistence on violence existing in games in the first place? Sheva writes:

“There is a growing multitude of games that don’t utilize violence as a central mechanic. Many of these are in the independent sector—The Stanley Parable, Papers, Please, and Never Alone are a few of my personal favorites. Telltale Games’ entire catalogue since the release of season one of The Walking Dead has had conversation and social maneuvering as the central game mechanic. Animal Crossing, The Sims, and Minecraft are all worldwide sensations made by what one would now consider to be AAA companies, and yet, since not one of these games has violence as a core mechanic, each and every one of them has been criticized as not being ‘game-y’ enough.”

This gets us closer to what is going on, that there is a tendency for people to argue that games without violence as a central mechanic are not games. This a dangerous tactic often used in online debates to delegitimize the significant, artistic work done by independent game developers who are expanding the language of games. For example, although a game like Gone Home was widely praised by the gaming press and was a commercial success, there was a vocal group of gamers who argued that since Gone Home is about exploration and discovery it cannot be a real game. This is where we get to the root cause of the kind of online harassment we see too often on Twitter and other online spaces: the pernicious belief that games and other media should only have one form and that they should exist to cater to a singular group of male gamers. As Sheva says in her article:

It’s this belief system which causes women, persons of colour, and others to be attacked online for even suggesting that games should continue to do more. One could simply say then that it’s the players and not the game—yes and no. This behaviour is informed by a specific kind of reactionary right-wing ideology — the same you find fighting against gay marriage, health care, or welfare. It’s the ideology that is against equality of any kind, that wishes to preserve one type of power and privilege. This is the root of the “masculine fragility” that Sheva mentions in her article — it is an attempt to circumvent the greater equality afforded everyone within games and games culture through intimidation, fear, and harassment.

Playing a violent game or making one or even enjoying one doesn’t make you a bad person, but seeing it as the only expressive form for games and then attacking other people for disagreeing with you certainly does. It is only through more sophisticated critical commentary, the building of supportive, diverse communities of game creators, the continued expansion of the expressive power of the medium, and actively challenging economic and social structures that reproduce, support, and enable one particular point of view about games, will ensure that a safe space for both players and creators will be the norm rather than a pleasant exception.