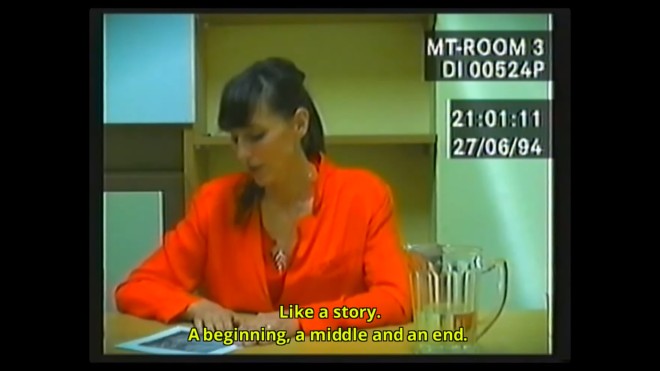 Recently, I wrote about ‘90s revivalism in video games. It was found to result from the confluence of nostalgia and the poor curation of games history (and the vested interest the games industry has in not preserving it). However, what I didn’t explore was the positive uses of nostalgia, especially when its seamlessly woven within narrative and gameplay. Games are most effective at conveying a story when narrative either when incorporated within the mechanics of play, or when communicated through the game’s play environment. When gameplay and story are fused together in this way, even nostalgic reflection becomes vital and artistic rather than merely reflexive or referential. I’ll be looking at two games — Her Story and Gone Home — whose grounding in ‘90s technology and culture is powerful and necessary for the player’s experience of the story.

(Warning: spoilers for Her Story and Gone Home below)

Sam Barlow’s video archive mystery Her Story made quite the impression when it came out in June. It was lauded for its intriguing approach to interactive fiction, and opinions differed as to whether its updating of Gothic tropes for the age of video was effective or problematic. In the end, Her Story gives the player a unique experience of narrative, and that’s largely due to the game effectively exploits its ’90s retro-aesthetics.

The game’s story is told through a series of interviews conducted with a woman named Hannah over a two month period in 1994. Her husband Simon has disappeared, and of course, not all is at it appears to be. The gameplay itself is novel — the only interaction you have is with a police archive that looks as if it’s housed on a Windows 95/98 computer—and you must type in keywords to watch videos. The big challenge is that each keyword limits you to watching only five videos, and as of result of searching for keywords, it means everything you watch is out of sequence.

The disordered nature of Her Story adds rather than detracts to the overall experience of the game. The old user interface is necessary historically — the disappearance took place in 1994 — and aesthetically, since the simulation of old technology enhances the player’s experience of the mystery. Although there have been the inevitable comparisons of Her Story to FMV games of the past, the use of video is incredibly important, and solves a number of story issues or questions that arise. Why can’t we hear the police officer’s questions or see his parts in the interview? Those videos were damaged in a flood in 1997, and so those parts are gone forever. Why are the videos so scattered? They were starting to archive them in 1999, and then forgot about the project during the Y2K panic. Furthermore, you’re initially limited to only five videos per keyword, a result of only having guest access to this archaic computer system.

For the game’s designer, Sam Barlow, using video was necessary for telling the story. It removed the challenges that would have been presented by having to render everything in 3D and use motion capture — a system he found costly and clumsy when it came to telling a story. (Look no further than L.A. Noire to see how overreliance on motion capture and 3D can hinder rather than help a detective narrative). The decision to set it in the ‘90s is grounded in practical design and story considerations that makes Her Story a memorable experience.

2013’s Gone Home is a fantastic first-person exploration game that draws on environmental storytelling and interactivity that forces the player — who is Kaitlin, the eldest daughter of the Greenbriar family—to piece together why her parents, and younger sister Sam, are completely absent when coming home after a long trip to Europe. The story is set in 1995 and includes specific cultural references to the X-Files, early video game consoles, zine culture, riot grrl, and Pulp Fiction. The game begins like a haunted house narrative but then evolves into a poignant family drama revolving around your sister’s coming of age as a gay teen.

Once again, the ‘90s setting is used to anchor the game’s story. 1995 was chosen as the year because this places it before widespread use of the World Wide Web. This was important for the game’s designers because this made Gone Home take place before digital communications technology became a dominant force in people’s lives. The game’s story is mostly communicated by interacting with discrete physical objects and diary entries, something that would not be as effective if you could access everything in a few emails. As a result, there’s a wide berth to include other important cultural moments — Nintendo, Bratmobile, and cool zines fighting the patriarchy among them. Gone Home does a deft job of communicating how different the world was even just two decades ago to craft an emotionally engaging story.

In the right hands, the past can become a powerful way to convey a story. Gameplay and story are occasionally in an uneasy alliance with one another, with one too often diminishing or interfering with the other. Both Her Story and Gone Home offer powerful narratives whose past settings add rather than subtract from the experience. They give use new perspectives on ourselves, and perhaps, the times we lived in.