If you grew up in the ’90s and watched a lot of PBS, chances are that you came across Lynne Thigpen as The Chief letting you know that Carmen Sandiego had nabbed another precious monument and that it was up to an assorted group of whiz kids to stop her, armed only with a buzzer and a sufficient grasp of world geography. Chances are that in the middle of the previous sentence you began to hum the theme song or can hear Thigpen’s voice telling you “Carmen Sandiego has struck again!” And chances are that you may or may not have played the series of fantastic educational games — first for DOS and then Windows — that starred the master thief. In the ’90s, Carmen Sandiego was everywhere and almost every kid with access to a school computer lab, a home computer, or just watching TV, knew that she and her V.I.L.E. agents were out there stealing great cultural artifacts and that only you, the prospective gumshoe, or the TV show’s agents, could possibly defeat her.

I came to know Carmen Sandiego watching PBS on weekday afternoons. My parents would have to peel me away from the TV for dinner because I needed to know which one of the newly christened ACME agents would be the hero, answering enough skill-testing questions about geography to halt Carmen Sandiego’s latest diabolical scheme. My next encounter with Carmen Sandiego came when I was at bargain bin at a local Loblaws and picked up a World Almanac that had been separated from the 1996 reboot of Where In The World Is Carmen Sandiego? I wish I still had it because I would spend hours reading it, uncovering all the facts I could such as when the Eiffel Tower was first built and the actual size of the great pyramids of Giza. I would spend hours at the computer lab of my elementary school trying to beat the game and stop her agents with names like Sarah Nade, Sarah Bellum, and M.T. Pockets. My Carmen Sandiego fandom reached its peak when I was given a copy of the 1997 version of Where In Time Is Carmen Sandiego? (also known as Carmen Sandiego’s Great Chase Through Time), I played this game religiously on my parents’ ’98 Compaq Presario, spending significant amounts of time with Hatsheput, Benjamin Franklin, Lewis & Clerk, Thomas Edison, and even Yuri Gagarin. I also preferred the theme song for the less successful Where In Time Is Carmen Sandiego? game show on PBS than the more famous a cappella theme used for Where in the World Is Carmen Sandiego? even though it’s terrible. 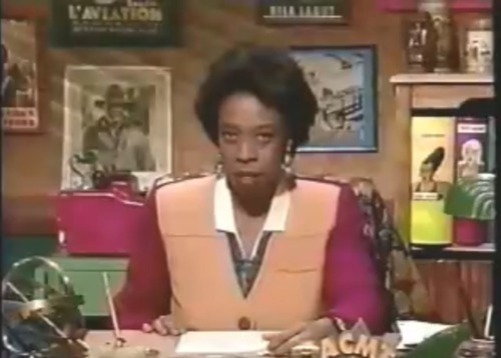 And then silence. Carmen seemed to disappear forever both from the TV and the computer screen. Did she pull off a final successful caper that let her be set for life? No. It’s only recently I learned the reason for the decline of children’s educational games.

In this excellent overview of the success and significance of children’s “edutainment” games of the 90s, the author reveals that it was Softkey, a CD-ROM distribution company, merging with The Learning Company and then Brøderbund (the makers of Carmen Sandiego) that spelled the beginning of the end for quality children’s educational games, including Carmen Sandiego. A surprising twist to all of this is that it was Kevin O’Leary, the founder of Softkey, and awful former host of both CBC’s Dragon’s Den and the Lang & O’Leary Exchange, that was responsible for this decline. Talking to Ken Goldstein, Broderbund’s former vice president of education and entertainment,  the Gamasutra article reveals why the merger with Softkey/The Learning Company was so disastrous:

“The new pricing model, driven by both Softkey and every other developer in the business selling CD-ROMs at such low prices, destroyed the economic viability of the edutainment production cycle. Goldstein was obviously frustrated with the merger, but 17 years later, he says it’s water under the bridge. To him, the Broderbund model was built on the philosophy of “people–products–profit,” where talented people created good product that drove profit, but once the merger kicked in, that philosophy seemed to flow in reverse, and Broderbund, now part of The Learning Company, was sold to Mattel.”

Carmen Sandiego was a victim of neoliberalism! As this Globe & Mail article reveals, Softkey’s rebranding as The Learning Company, and eventual sale to Mattel, went so badly that O’Leary was forced out. The various divisions of The Learning Company were then broken up and sold, thus ending an era of great children’s games. Kevin O’Leary — a man almost singularly responsible for the disappearance of Carmen Sandiego and Reading Rabbit, and for Chris Hedges never being interviewed by the CBC again. 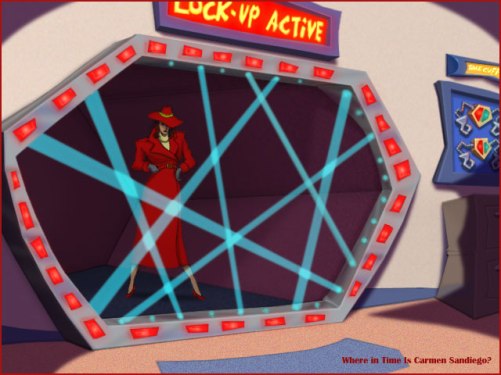 It’s difficult to express fully just how significant Carmen Sandiego was as a video game antagonist, and how the digital play spaces offered to children through her games were. Carmen Sandiego wasn’t good because you could pick up some trivia about the Declaration of Independence or the population of Iowa, it was good because it offered you, the player, a wondrous and imaginative place filled with improbable technology, world and time travel, and one of gaming’s best villains. Carmen was clever, mysterious, and always one step ahead of you. These games were a great balance of adventure game mechanics and playful, exquisitely textured narratives. You wanted to live inside these worlds and get to know its eccentric characters that inhabited them a little more. The world almanacs and exquisitely detailed manuals that came bundled with each game added another level of detail, giving you a whole other level of experience and knowledge outside of the game. I always felt bad catching Carmen Sandiego because I wanted her to accomplish her goals, to actually alter the course of world history; that’s just how powerful she was. How could she not get away it?

Unfortunately experiencing Carmen Sandiego’s past glories are difficult. Although you have the original Where In The World? and Where In Time?  available on the Internet Archive’s virtual DOS player, the later CD-ROM reboots made for Windows (my personal favourites) have never been restored for modern computers even though websites like GOG.com and studios like Night Dive have shown restoring classic PC games is both an in-demand and profitable enterprise. It’s sad that children aren’t getting to experience Carmen Sandiego (or someone like her) in 2015. If there’s one thing from the ’90s that I want to come back, it’s Carmen Sandiego and the devious plots that only a child’s imagination could foil.

Now here’s the terrible (but wonderful) Where In Time Is Carmen Sandiego? game show theme.

One thought on “Where in the world did Carmen Sandiego go?”